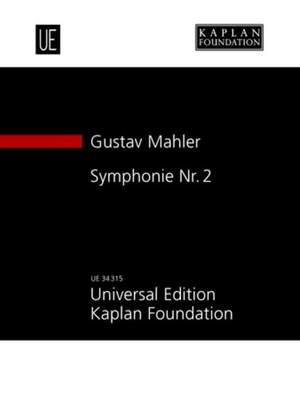 Over the years, the need for a new edition of Mahler's Symphony No. 2 became apparent for several reasons. First, many new sources for this work have become accessible since 1970, when Erwin Ratz completed the first critical edition of this symphony, the most significant being Mahler's personal reference score in which he recorded changes to be made (his last entries were made in September 1910). The second reason was the significant strengthening of the editorial standards of the critical edition in recent years. The music is now computer-generated. Previously, changes to the score could be made only by retouching the film of old engravings. Computerization
also ensures a concurrence between the score and performance materials. Editorially, the new edition benefits from expanded texts that describe and assess the source materials, document and explain the editors' decisions and provide detailed information on the work's origin, the history of the published scores, performance practices, etc. Over the past five years, Renare Stark-Voit and Gilbert Kaplan, editors of the new edition of Symphony No. 2, have identified, evaluated and analyzed every significant source, and as a result of their work a substantial number of errors has been corrected.