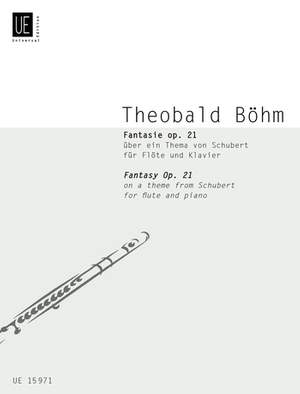 Boehm, T: Fantasy Op. 21 on a Theme by Schubert

Theobald Böhm (1794-1881) not only contributed to the evolution of flutemaking by constructing his Böhm flute, but also added to flute Iiterature by composing numerous etudes, cancertos and recital pieces. One of the favourite kinds of virtuoso instrumental concert pieces in the 19th century<BR style=BORDER-TOP-COLOR: ; BORDER-LEFT-COLOR: ; BORDER-BOTTOM-COLOR: ; BORDER-RIGHT-COLOR: >was the fantasy or set of variations on well-known opera melodies or folksongs.<BR><BR>Oddly enough, the first edition on which our new edition is based has the title Fantaisie sur un Air de<BR>Beethoven (!). This was obviously a lapse in the composer's memory, since the melody is clearly the<BR>Trauerwalzer Op. 9 by Franz Schubert, which also inspired Franz Liszt - among others - to write a grandiose set of variations.