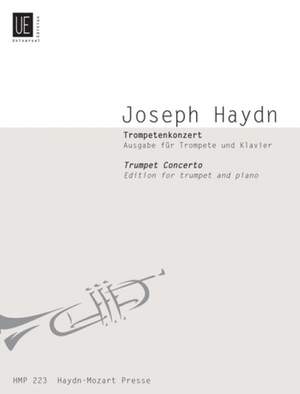 Joseph Haydn's Trumpet Concerto (No. VII e: 1 in Hoboken's thematic catalogue of the composer's works) has become not only the most important concerto for the trumpet, being required material in nearly every orchestral audition, but with over 20 recorded versions on long-playing records is also the composer's best-known concerto, rivalled only by similar works by Vivaldi, Bach, Mozart, Tchaikovsky, and a few others. […] The only surviving source for the Trumpet Concerto is Haydn's autograph manuscript, now in the library of the Gesellschaft der Musikfreunde in Vienna. ln view of the wildly differing readings of many important passages of this concerto both in modern editions and in recordings, the critical edition offered here is long overdue. (E.H. Tarr and H.C. Robbins Landon, taken from the preface, 1981)