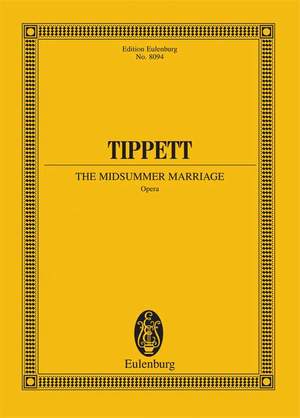 Like few other theatre works—The Magic Flute, A Midsummer Night’s Dream—Tippett’s first opera creates a wholly other place, one where human actions can be seen as in a tilted mirror. Since this is indeed an opera, the place, or dreamspace, is conjured by music: by luminescent music that, in its flowing abundance, radiant harmonies and evocative wind colourings, represents the natural world within which the characters have to integrate themselves.The central couple, those whose marriage is at first subverted and then gloriously celebrated, are Mark and Jenifer: he a young man of the earth and the senses, she a young woman of lofty spirituality. Each is only half a person, and before they can be united they have to be made whole, have to find within themselves an understanding of the other. Overseeing their mythic initiation and psychic healing are two Ancients, votaries of a temple on a wooded hilltop.As in the Mozart precedent, which the composer certainly had in mind, there is also a more workaday couple, Jack and Bella. The other principals are Jenifer’s businessman father King Fisher, who wants to stop the wedding for reasons of his own, and an Erda-like seer. There is also a dancer, Strephon, leading the exuberant ballet in which the orchestra completes the story of enlightenment and passion. It is ultimately a victory of love and, before love, self-knowledge.(Paul Griffiths)