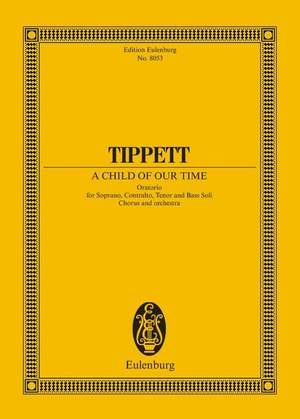 Offer, Tippett, M: A Child of Our Time

The oratorio 'A Child of Our Time' was Tippett’s artistic and emotional response to the events that led to the 'Kristallnacht' pogrom of November 1938. For his oratorio Tippett used as his formal and historical models the Bach Passions and Handel’s Messiah which share with this contemporary morality the subject of the death of an individual set against the universal background of human suffering. Tippett’s use of the spiritual as a contemporary equivalent for the Lutheran chorale of the Bach settings draws his audience more closely into the drama through the spirituals’ ‘unique verbal and musical metaphor’. By 1941, when Tippett had completed the composition of his oratorio, the practicalities of staging a performance during wartime were difficult to say the least. It was, however, through the direct agency of his lifelong friends and professional colleagues, Benjamin Britten and Peter Pears, that the work was first performed in London on 19 March 1944 under the direction of the former Schoenberg pupil Walter Goehr, and with Pears himself as the tenor soloist.