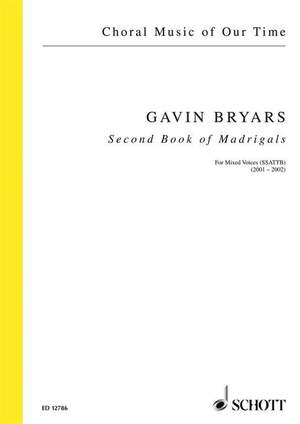 Like many Englishmen I had sung madrigals for pleasure – usually late at night with friends, after several glasses of wine. While these madrigals have their charm, and many are extremely beautiful, I found, as I began an extended exploration of the madrigal as a creative venture, that the richest source lies in the Italian Renaissance. In 1998 I embarked on a project to write a series of madrigals, eventually deciding to collect them in ‘books’ in the manner of Italian madrigalists, such as Monteverdi or Gesualdo. The Second Book is for an unusual six-part group – the Scandinavian Trio Mediaeval (3 sopranos) and three tenors (John Potter plus two from the Hilliard Ensemble) – and sets Petrarch in the original 14th century Italian. I focused on those sonnets known as the Rima Sparsi ("scattered verses") and added one extra Petrarch setting – originally a radiophonic piece ("Marconi's Madrigal") for CBC's Marconi Day. Gavin Bryars