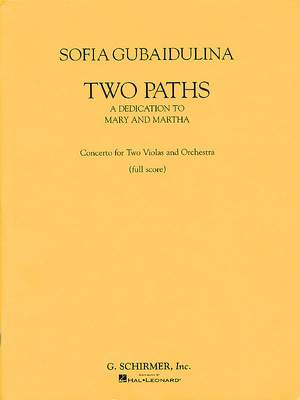 Sofia Asgatovna Gubaidulina (b. 1931) is a Russian composer, who for many years struggled to gain recognition for her work, as it was seen by the Soviet authorities to be excessively atonal and too overtly spiritual.

Her 1999 work, Two Paths, was commissioned by Kurt Maser and the New York Philharmonic, and enjoyed substantial critical acclaim. It employs the unusual combination of two solo violas and orchestra. Thesubtitled reference is to the two sisters of Lazarus from the New Testament, whose different experiences of eros and agape intertwine and clash in the two solo parts, providing a dramatic theme which the stunningorchestralaccompaniment is built around.