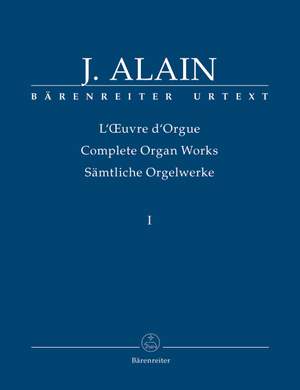 Jehan Alain, a pupil of Marcel Dupré, came from a family of musicians near Paris . His works display literary influences as well as the influence of Gregorian chant, early music, impressionism, jazz, non-European rhythms and tonal systems. His treatment of the organ, almost chamber music-like, shows a stylistic departure from the romantic-orchestral type of organ composition.

This is accompanied by a change of direction to an idealised sound which combines elements of French classicism and romanticism in a new kind of synthesis. Not only the interpretation, but also a proper analysis of Alain’s organ works has been difficult until now because of the lack of a critical edition. For the first time this new three-volume scholarly-critical Urtext edition of the complete organ works fills this gap. The publications also coincide with the 100th anniversary of Alain’s birth. The editor is an internationally recognised scholar and interpreter of Alain’s organ works.