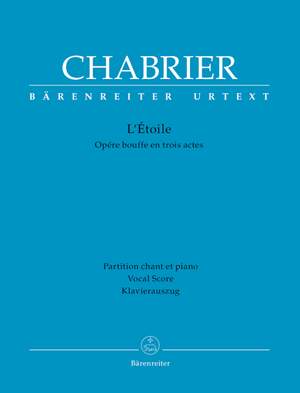 With “ L’Étoile ”, Chabrier composed a light-hearted opera which has increasingly enjoyed revivals in recent years. The plot is introduced by King Ouf I who offers his subjects an execution every year on his birthday. Unfortunately the problem now arises that no crime has recently been committed which might serve as a reason for an execution. Finally, he finds a would-be victim in the young Lazuli. However, according to predictions by the astrologer Sirocco, Lazuli’s fate is closely linked to the king’s own life. The comic opera is further bolstered by a story of mistaken identities which involves a great deal of diplomacy, a love story and a large number of refined, yet catchy melodies. Chabrier was a master of the sensitive and complicated art of musical comedy, a field where he can be compared in equal measure to Offenbach, Rossini and Mozart.

This vocal score is based on the full score edited by Hugh Macdonald which will be published in 2011 as part of the series “L’Opéra français”.