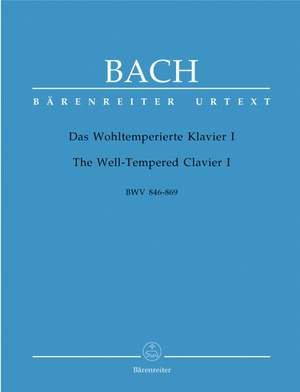 Johann Sebastian Bach's idea of composing a collection of preludes and fugues in all major and minor keys was new andrevolutionary in the second decade of the 18th century, particularly when considering that the tuning in use up top then distributed pure and “impure” intervals irregularly throughout the keys. The result was that one could playvery well in many keys, but not at all in others. Bach was the first composer to conquer the entire breadth pf tonality in his Das Wohltemperirte Clavier (The Well-Tempered Clavier), thus providing the musical world withamasterpiece of keyboard literature.

”The ‘Well-Tempered Clavier’ is the Old Testament, Beethoven's sonatas the New. We must believe in both.” Hans von Bülow

The preludes and fugues of “The Well-TemperedClavier” embrace an entire cosmos of compositional devices and musical characters the “ne plus ultra” of ‘unity through diversity’. Here Bach not only presented the sum total of keyboard artistry in his day but foresaw itsfuture evolution. His treatment of the keys marked a turning point in music history.