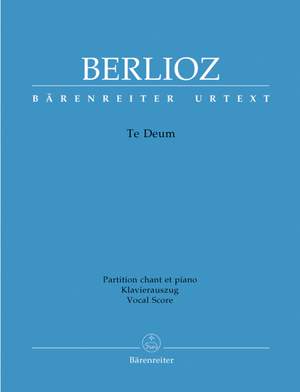 The Te Deum was composed in Paris in 1849, following Berlioz’s first visit to England, at a period when political unrest in France had made the future for artists and musicians seem very uncertain. He had no particular occasion in mind, but hoped for some years that it would be available for some grand ceremonial occasion. Once Napoleon III had seized power, such an occasion seemed more likely, but in the end Berlioz had to wait until 1855 for an opportunity to perform the work. This took place for the opening of the Exposition Universelle on 30 April 1855 in the church of St.-Eustache, Paris. It was the only time in his life that Berlioz performed it, with the exceptionof certain extracts in later concerts. The score was published in 1855 with a dedication to Prince Albert, consort of Queen Victoria.