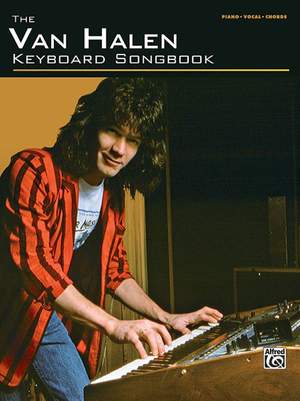 Van Halen is one of the biggest rock bands to emerge in the last 30 years. The band dominated the Billboard Rock charts in the 1980s and early '90s, with hit singles like "Jump," "Panama," "Hot For Teacher," "Dreams," Why Cant This Be Love," and "Right Now." On March 12, 2007, Van Halen was inducted into the prestigious Rock & Roll Hall of Fame and the band set off on a North American tour throughout 2007 and 2008 with original Van Halen frontman David Lee Roth. Although Van Halen is often thought of as a guitar band, many of Van Halen's biggest hits were driven by Eddie Van Halen's fantastic talent for keyboard-oriented pop hooks. The Van Halen Keyboard Songbook is the first-ever collection for Van Halen's keyboard fans, featuring 13 of their classic hits. Titles: Ain't Talkin' 'Bout Love * 1984 * Jump * I'll Wait * Dreams * Love Walks In * Why Can't This Be Love * When It's Love * Feels So Good * Right Now * Not Enough * Neworld * How Many Say.