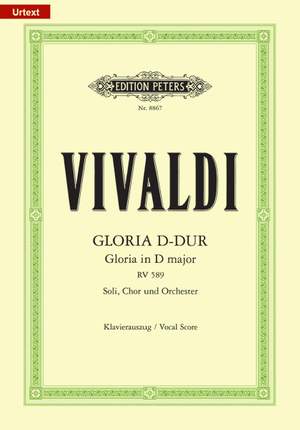 Vivaldi's international renown came about largely as a result of his concertos, which were collated, and, of course performed, throughout the courts of Europe. Quite unlike the concertos, Vivaldi's voluminous output of sacredworks was hardly known beyond the purlieus of their original performance. Following the composer's death they became increasingly unknown and even today it is difficult to say how many pieces of church music Vivaldi composed.

As few of Vivaldi’s church compositions can be dated on the basis of written or stylistic evidence, the origins of the Gloria In D remain shrouded with conjecture.

Rather than being conceivedaspart of a larger Mass setting, the Gloria is an independent work, a cyclical composition of broad design consisting of twelve self-contained movements. Stylistically, it closely resembles a concertante Mass.

This Urtext edition of Vivaldi’s ever-popular work provides you with an accurate realisation of the composer’s original intentions with thoroughly detailed editorial markings and suggestions, as edited by KlausBurmeister.