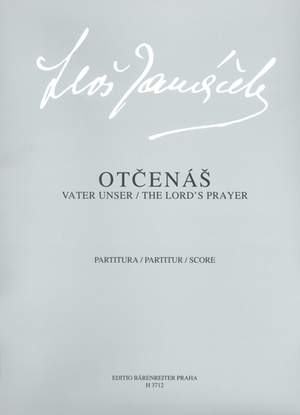 The original score of Janacek's The Lord's Prayer, a work written for Tenor and Mixed Choir with Piano or Harmonium accompaniment, was completed in 1901. Six years later the composer reworked it with Harp and Organaccompaniment. This version, contained in Barenreiter's catalogue, was first performed as a cantata on 18 November 1906 by the Hlahol Choral Association in Prague.

The composer was prompted to write a musical setting to thetext by a series of paintings by contemporary Polish artist Josef Mecina-Krzesz, who inspired Janacek to create his own interpretation of the prayer with strong social undercurrents. The melody throughout betraystheinfluence of the Moravian folk song, with marked accents on the penultimate syllables - as in Lach dialects. The piece incorporates rich polymelodic treatment. In terms of expression, the dramatic sequence anticipates the operaJenufa.

The basis for the edition by Bohumir Stedron was the third authorised copy of The Lord's Prayer kept in the Prague Hlahol archive. In contrast with this copy,the dynamics, phrasing and rhythm were unified andsupplied where necessary. The score contains a preface, critical commentary and sung text in Czech and German.