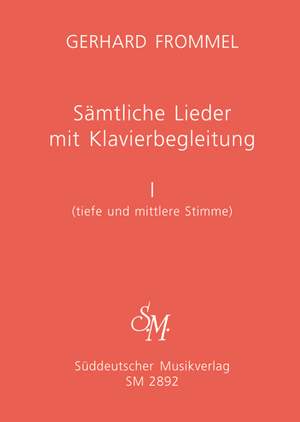 Lieder enjoy pride of place in the oeuvre of Gerhard Frommel (1906-1984). The majority are settings of poems by Stefan George, although Charles Baudelaire, Friedrich Nietzsche, Rainer Maria Rilke, and others also feature. With their primarily tonal idiom, they draw on the lied tradition of the 19th and early 20th centuries.

This volume of Frommel’s complete lieder for solo voice and piano is the first to include his song cycles opp . 2-5 in a single edition. The editor, Wolfgang Osthoff, is a world-renowned authority on Frommel. The volume contains a detailed preface in German and a critical report.