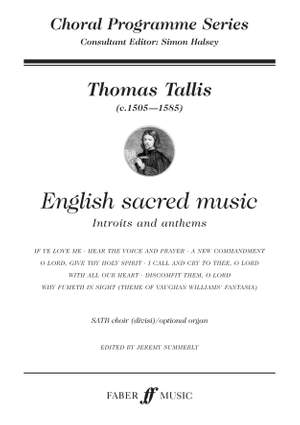 English sacred music is a collection of English-texted sacred music that celebrates the genius of Thomas Tallis, which is selected and edited by Jeremy Summerly to provide an invaluable source of introits and anthems for choirs. For SATB mixed voices choir with optional accompaniment.

The sixteenth century was a time of religious upheaval in England. From Henry VIII's protestant reformation through Queen Mary's staunch but short-lived Catholic revival to the return of Anglicanism in Elizabethan times, it would have required careful diplomacy for a Roman Catholic like Thomas Tallis simply to stay alive. In fact he became the most respected composer of his generation and is now recognised as one of the country's greatest composers.

The Choral Programme Series is now a well-established programming tool for many choirs as it offers a wealth of fresh material from many eras and in many styles. Also offering great value for money as each volume in the series provides up to forty minutes of music