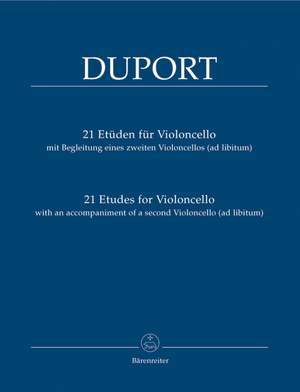 Duport, J: 21 Etudes for Violoncello with an accompaniment of a 2nd Violoncello (ad libitum)

The new edition of these standard cello etudes uses the first edition of the etudes as its point of origin; meaning this new edition is free from many elements added by various editors over the last 200 years.

First of all Rummel has modernized the fingerings and bowings to reflect cello playing today. He has also restored the order of the etudes as Duport originally had them and furthermore the ad libitum 2nd cello has been brought back to life; the new edition offers the 2nd cello in a separate score included in the edition.

As with the already popular Popper Etudes (BA 6978 and BA 6979), the Duport edition also includes a brochure with comments on the etudes and with references to their usage in the standard cello literature.


- Fold out pages where you need them
- Ad libitum cello part included
- With fingerings and bowings for today's cellists
- German / English brochure with playing tips and references to where the techniques can be found in the standard cello literature
- New large format 24.1 x 31 cm