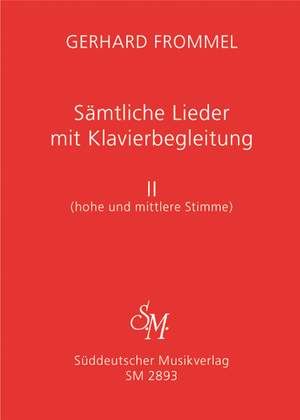 The songs occupy a special position within the compositional oeuvre of Pfitzner’s pupil Gerhard Frommel (1906–1984). They form the basis out of which, as the composer says, his “entire work grew slowly and organically”. The predominantly tonal musical language, the cantabile quality of the songs forged in response to the rhythm of the poetry and the rewarding pianistic accompaniment place the songs firmly in the Lied tradition of the 19th and early 20th centuries. Yet their distance from Romantic contemplation and excesses lends Frommel’s songs their own austere and measured sound.

The second and final volume of songs with piano for high and middle voice includes the song cycles acknowledged by the composer and individual songs which are not included in the first volume (or appear in a different version). Early compositions from the early 1920s, which Frommel did not list in the catalogue of works, are not included.

This two-volume edition of the solo songs with piano makes available an authoritative version of this outstanding part of his oeuvre .

„ They are wonderfully original compositions that deserve to be heard .“
(Notes June 2010)