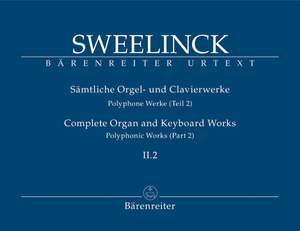 The central importance of Jan Pieterszoon Sweelinck (1562–1621) for Baroque keyboard music can hardly be overestimated. Siegbert Rampe’s scholarly performing edition is the first edition of Sweelinck’s complete keyboard works which differentiates between works of certain authenticity, works of uncertain authenticity and doubtful works. The eight volume edition, complete with commentaries in German and English, reflects the latest state of scholarly research.

Volume II.2 completes the publication of the Urtext edition. Volumes II.1 and 2 include all 22 fantasias and echo fantasias which have survived under Sweelinck’s name or are attributed to him, four ricercari and a capriccio. The appendix contains four further fantasias. In addition, several compositions are published for the first time in different, presumably original versions.


“All eight volumes include commentaries in German and English and reflect the latest scholarly research. Highly recommended.”
(The American Organist August 2010)