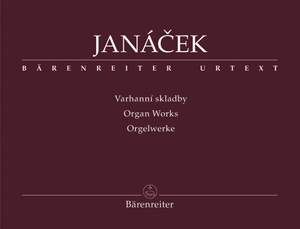 Although Leos Janacek played the organ from his youth onwards, achieving a high standard as a performer and improviser, he composed only a few works for the instrument.

This volume of his complete organ works, based on the Critical Complete Edition of the Works of Leos Janacek, contains three pieces from his period of study in Prague 1874-75 (“Overture, Varyto” and “Choral Fantasy”), “Two Pieces for Organ” self-published in 1884, and above all the Postludium, the penultimate part of the famous and much later Glagolitic Mass (1926). This independent Intermezzo in the style of a passacaglia, which the author simply called “Organ solo”, demonstrates Janacek’s original and highly expressive compositional style.