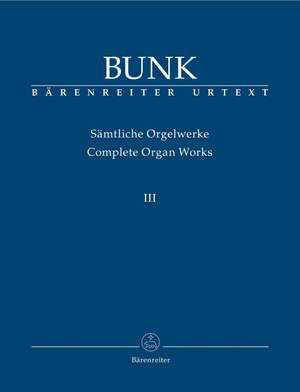 Gerard Bunk (1888–1958) was born in Rotterdam and thanks to Max Reger’s support, became a lecturer at the Dortmund Conservatory and organist at the famous Walcker organ at St. Reinoldi .

He was one of the greatest organists of the first half of the 20th century who, besides Reger, was able to develop his own characteristic style. His organ compositions consist of free individual works, character pieces, chorale preludes and six large-scale concert works.

Volume III contains three important works: Introduction, Variations and Fugue on an old Dutch folk song in D minor op. 31, the Sonata in F minor op. 32 and the Passacaglia in A minor op. 40.

This Urtext edition, prepared by the composer’s grandson, is the result of extensive and painstaking research into the sources reflecting the latest musicological findings. The complete edition will comprise six volumes.