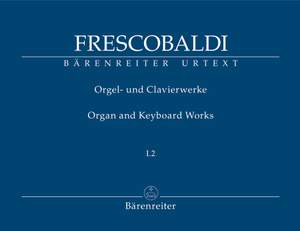 Girolamo Frescobaldi’s music strongly influenced composers such as Froberger, Buxtehu de, Johann Sebastian Bach and Muffat . Bärenreiter is now complementing the long-standing Pidoux edition with an Urtext edition in six volumes which sets a new standard. It offers both professional musicians and enthusiasts an unrivalled musical text which will satisfy practical requirements whilst at the same time providing comprehensive information on all currently known sources and the history of the works. This Urtext edition of the organ and keyboard works has been edited by the renowned specialists Christopher Stembridge and Kenneth Gilbert.

Vol. I.2 includes the toccatas and partita movements from the first edition published in Rome by Nicolò Borboni . Each volume in the new Frescobaldi edition contains a critical commentary as well as an introduction de scribing the genesis of the works, situation regarding sources and performance practice.


“…worth every penny.”
(Harpsichord Fortepiano, Autumn 2010)

“The volume can not be recommen de d too highly. This new edition is the obvious choice.”
(Organists’ Review, August ’10)

"Stembridge's new edition thus has some of the features of a scholarly performing edition and some of the features of a complete critical edition. It provides the level of detail usually found in a critical edition and with its multiple readings of sources is a superb scholarly reference. On the other hand, that very multiplicity challenges the performer to work wut ab "open" text, to experiment with different versions of a work, and to revisit questions of improvisation within 17th-century performance practice. As such, this is a valuable addition to the range of modern editions of Frescobaldi's keyboard music."
(Early Music February 2011)