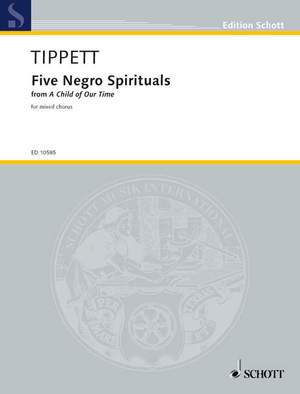 from A Child of Our Time

These five spirituals for unaccompanied chorus, despite the occasional appearance of complexity are basically simple: the harmony, indeed, is of the simplest possible. The apparent complexity arises primarily from the number of parts, which are not however all real parts. These, in fact, seldom comprise more than the traditional four. Lines are frequently doubled at the octave, rather in the manner of organ registration, so that the chorus needs to be thought of as an organ-like body producing a homogeneous sound at many levels of the chords and melodies. Thus, the numbers and even the kinds of voices needed to produce these chords and melodies in the most effective manner must be selected by the conductor from the whole body of the chorus according to the conditions of performance. Great latitude can be taken in this respect, even to the extent of using low female voices for the high registers of written tenor parts, or high male voices for the low registers of written alto parts, etc.The only parts which are strictly differentiated are those marked Leader. These should be an individual voice, standing out from the choir sufficiently to lead the singing, both in the words and in the music. They need not be soloists engaged from outside.If the spirituals are performed in this way the apparent complexity of certain printed pages will disappear. Any reasonably sized chorus with four good leaders can produce the effect required.