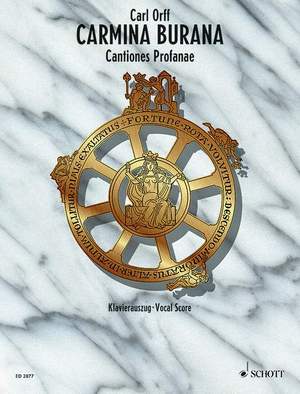 Arranged for three soloists; Soprano, Tenor and Baritone as well as the chorus SATB. Carl Orff’s dramatic cantata, Carmina Burana was originally designed as a theatre piece, a 'scenic cantata' to be danced as well as sung and played. Already 38 when he began composing Carmina Burana — Songs from Benediktbeuern — Orff was nearly 42 when it finally was produced in 1936. Carmina Burana reflects the period when Orff finally turned his back on chromaticism and complex polyphony for a deliberately simplified style, characterised by its rhythmic energy and the repetition of short melodic phrases supported by elemental block harmonies. In Latinand High German.