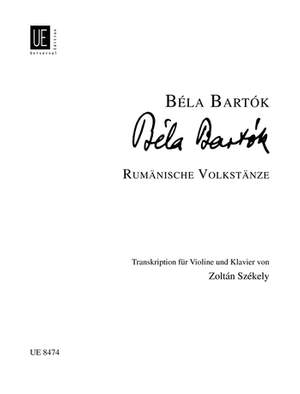 The 'Romanian Folk Dances' undoubtedly rank amongst Bartók's most popular compositions. The earliest version is scored for piano (1915) and was published by Universal Edition in 1918. The composer himself orchestrated this version in 1917. Several other chamber music arrangements (for example, Zoltán Székely's version for violin and piano) were not by Bartók, although he authorised them.

The musical material derives from Bartók's collections of folk music, which date right back to 1904, when he wrote down a melody sung by a Hungarian peasant girl. In the course of extensive travels throughout Eastern Europe, Bartók compiled an enormous collection of folk tunes (by 1918 his collection comprised no fewer than 2700 Hungarian, 3500 Romanian and 3000 Slovak dances and songs) which would in all probability have been lost had Bartók not written them down. As it was, some of them found their way into his compositions. In 1908 Bartók jotted down dance tunes in Transsylvania. They are the source of the 'Romanian Folk Dances'.