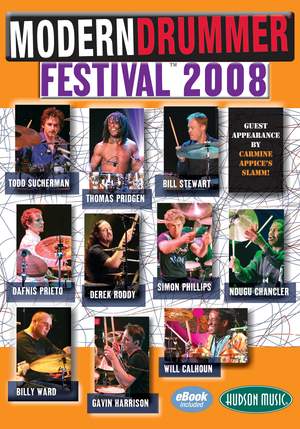 Featuring amazing performances and illuminating interviews from eleven of today's greatest drum artists, including Thomas Pridgen or The Mars Volta and Todd Sucherman of Styx. Hudson Music's new, four-disc, twelve-hour DVD of the 2008 Modern Drummer Festival is much more than merely the highlights of the most prestigious, longest-running, largest live drumming event in the world.

The deluxe Modern Drummer Festival 2008 DVD package is also an incredible educational resource that provides in-depth insights and exclusive instruction (including a printable, 28-page eBook) from one of the most musical and musically diverse groups of drummers in theFestival's 20-year history.

Two full interview DVDs are an integral part of the package – allowing artists to augment their on-stage performances with back-stage explanations and demonstrations of their concepts, backgrounds, influences, techniques, interpretations and compositions. Included are inspiring conversations with each drummer as well as unprecedented drummer-to-drummer interviews, such as Simon Phillips with Gavin Harrison, Ndugu Chancler with Will Calhoun, and Todd Sucherman with Derek Roddy, plus on-screen graphics that link the lessons to specific PDF files with notated patterns and exercises in the eBook. The package also features extensive, multi-camera coverage of the spectacular drumming that has made the Modern Drummer Festival a must-see event for drummers around the world. While some players offer solo performances, others play with pre-recorded tracks or live bands during their Festival segments. The Saturday performances showcase Billy Ward, Will Calhoun, Ndugu Chancler, and Simon Phillips; while the Sunday performances highlight Carmine Appice, Derek Roddy, Dafnis Prieto, Todd Sucherman, Gavin Harrison, and Bill Stewart.