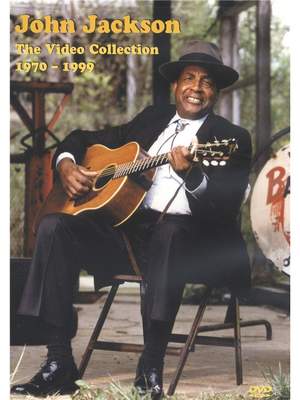 John Jackson grew up in rural Virginia, listening to the older musicians around him and the blues stars whose records he heard on his family's wind-up phonograph. For a while in his youth, he played at country dances, but mostly he just picked the guitar and banjo for his own amusement, and his tastes ranged from the Piedmont blues of Blind Blake, Josh White and Blind Boy Fuller to the hillbilly yodels of Jimmie Rodgers and an old-time banjo style that reached back to the 19th century.

“I can play most anything I put my mind to if I want to,” he would say, with a big smile. “Blues, mountain hoedowns dance tunes... I don't get into soul or disco or rap music or nothing likethat, but I ain't got anything against it; it just didn't come along when I did.”

Jackson always seemed supremely relaxed and easy-going, but under his friendly country manner he was an indefatigable worker. He recalled a time when musicians would walk twenty miles over dirt roads to get to a house party, play till the wee hours of the morning, then walk home and put in a full day on the farm, and he kept numerous jobs most famously as a grave digger into his seventies. He was just as dedicated onstage, an all-around entertainer who mixed his songs with jokes and stories and tried to give his audiences a sense not only of the music he loved, but of the world that had produced it.

That world is long gone, but it lives on in the loping rhythms of Jackson's intricate guitar picking and the mellow flow of his honey-slow Virginia drawl. This is old-time, back-porch country music, played by a man who always seemed like he was just kicking back and enjoying himself with some friends, but put all he had into every note.