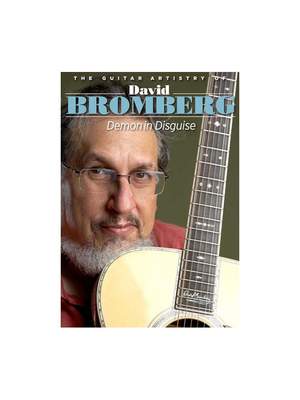 “The extraordinary folk-blues guitarist David Bromberg has strolled back into the spotlight as abruptly as he resigned from it nearly three decades ago when he dissolved his fantastic and popular touring band in 1980 to studyviolin making... The fluid, orchestral invention of Bromberg’s fingerpicking — his original calling card on pivotal late-1960S and 1970S sessions for Jerry Jeff Walker (”Mr. Bojangles”) and Bob Dylan (New Morning) — is inundiminished bloom, invigorating sturdy old blues and ballads.” - ROLLING STONE

In this intimate portrait, the legendary David Bromberg talks about his influences and performs the music he loves - a wide panorama ofAmericanblues, folk, country, bluegrass, ragtime, jazz and contemporary sounds.

Inspired by the music of Pete Seeger and the Weavers, among others, he began studying the guitar at age 13. After graduating from Tarrytown HighSchool, he enrolled at Columbia University intent on a career as a musicologist. During this period he discovered the old recordings of Blind Blake, Lonnie Johnson, Big Bill Broonzy, Marshall Owens, Luke Jordan and other greatcountry bluesmen, as well as contemporary recordings of B.B.King, Freddie King and Albert King. He studied with Rev. Gary Davis for several years and as Rev. Davis said, “I have no children but I have several sons”. David was ason to the great Reverend.

Drawn to Greenwich Village's flourishing coffeehouse folk music scene of the mid-1960’s, David left Columbia University and opted to devote full time to his music. Shortly thereafter, his extraordinaryguitar picking and exceptional stylistic range brought him to the attention of many other musicians: Bob Dylan, Ringo Starr, George Harrison, Tom Paxton, and Chubby Checker are only a few of the notables who sought David out as aback-up artist for recording. In all he has played as a sideman on over 100 albums.