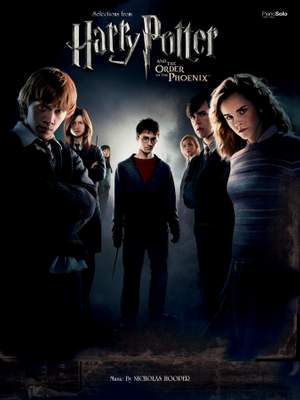 The wizarding community has shunned Harry Potter and Hogwarts’ Headmaster, Albus Dumbledore, who claim that Lord Voldemort has regained a body and has been restored to full power. They are instead influenced by the propaganda of The Daily Prophet and the intentional ignorance of the Minister of Magic, Cornelius Fudge. Fudge appoints a new Hogwarts Defence Against the Dark Arts teacher, Dolores Umbridge, who refuses to allow them to discuss the return of Voldemort. In defiance, the students create Dumbledore's Army, with Harry as teacher to prepare his schoolmates in case a battle with Voldemort ensues.

This book of piano solos, featuring themes from the latestfilm, includes a section of colour photographs of scenes and images of the film. This fifth instalment of the Harry Potter novels features a colourful and inspiring score by Nicholas Hooper, a British film and television composer. He has scored the award-winning BBC productions Land of the Tiger and Andes to Amazon, as well as the TV movies The Tichborne Claimant, My Family and Other Animals, and The Girl in the Cafe, among others. Hooper won a BAFTA Award for Original Score in 2004 for The Young Visitors.