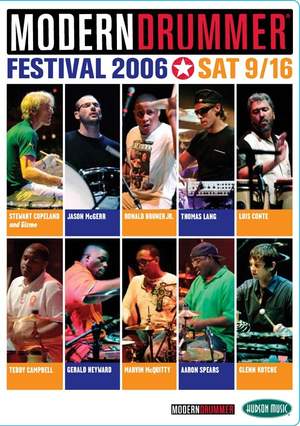 On September 16 and 17, 2006, The Modern Drummer Festival Weekend returned to the incredible New Jersey Performing Arts Center for its most ambitious festival ever. Sixteen drummers and percussionists performed with more than twenty musicians making for one of the most exciting festival weekends in its eighteen-year history. Backstage, while these incredible performances were taking place, each artist was interviewed at a practice kit. Each in-depth interview features playing and demonstration, as well as discussion on technique, warming up, their MD Fest performance and much more.

Disc One: The Performances. The spectacular performances on this DVD include:

Disc Two: VIP backstage pass, the interviews
Extensive and in-depth interviews at a practice kit with each of this year’s featured performers, including demonstration and discussion of technique, practice and warm-up routines, and specific playing examples from their MD Festival performance.