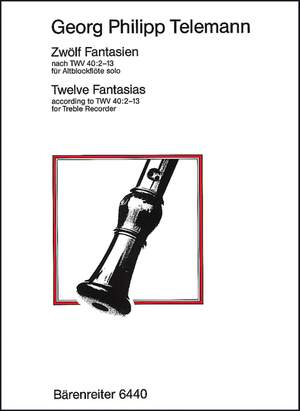 Twelve Fantasias for treble Recorder solo based on the fantasias for flauto traverso solo TWV 40:2-13.

This arrangement of Telemann’s “Twelve Fantasias” for treble Recorder is based on our edition for solo flute BA2971. With the exception of Nos 4, 5 & 12 which were transposed up a fourth for the Recorder, all other fantasias are transposed up a third following a technique often used in the 18th Century.

The Fantasias for Flute without bass address themselves less to the virtuoso than to the amateur flutist, who will find everything he wishes in these pieces. Although Telemann himself mayhave lost track of his works, the many flutists who have perfected their technique and musical interpretation with the help of these lovely Fantasias will never forget them.