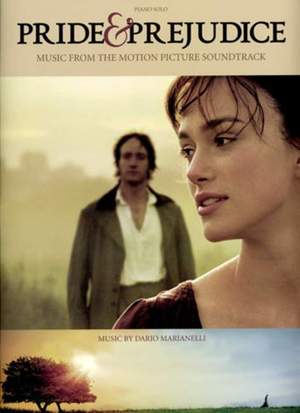 Recapture those magical moments of love, dreams and secrecy, rich in Georgian elegance, with this collection of Pride And Prejudice sheet music. The first of hisfourcollaborations with director Joe Wright, Dario Marianelli was nominated for an Oscar for his work on this beautiful soundtrack, whose melody adds to the romantic overtones while also staying true to the period.Theacclaimed pianist Jean-Yves Thibaudet played Piano on the film's soundtrack, enhancing the emotion and effectiveness of the drama unfolding on the screen.

When Wright and Marianelli first met,theirconversations turned to Beethoven, whose early sonatas formed the basis of the Pride And Prejudice score. Other pieces were inspired by the period during which the film is set, such asMerytonTownhall. The Romantic period of classical music that the score emulates matches perfectly the romantic tone of the film. The novel is one of the greatest love stories ever told, the film is a faithfuladaptation, andthe score should be required playing for any pianists looking for some instrumental love songs with which to serenade their sweetheart.
Playing this beautiful collection of sheet musicfrom thesoundtrack to Pride And Prejudice is perfect as a way to spend an evening, the most romantic background music for a candlelit dinner, or just to enjoy the cinematic melodies when these compositionsare playedon solo Piano.