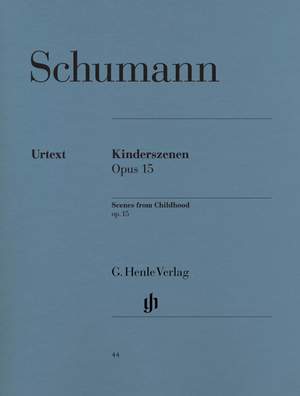 “As far as the Scenes from Childhood are concerned, I owe them one of the liveliest pleasures of my life.” These words were uttered by none other than Franz Liszt. In the evenings he often enjoyed playing part of them, not only for his little daughter Blandine-Rachel but also for his own pleasure. Even today, the “Scenes from Childhood” still raise the question as to whether they were written for children or adults. Schumann himself described them as being the reminiscences of an older person for older people, but did not deny that “several children’s heads were in his mind when composing them”. Ernst Herttrich has revised our well-loved edition, incorporating the latestscholarly findings. In the appendix he also takes a stand on the metronome markings which were taken over from an early print.