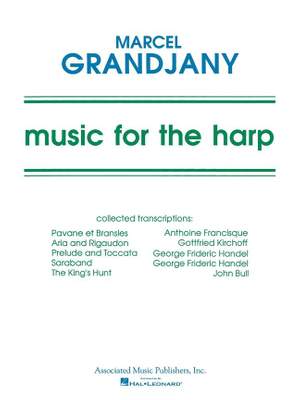 This book is a thoughtful collection of transcriptions by Marcel Grandjany for intermediate/advanced (Grade 6-8) harpists. Fingerings are included, as well as an explanation of musical signs at the beginning of thebook. Music For The Harp includes transcriptions of 7 Baroque masterpieces – Aria (Kirchhoff), Pavana Et Bransles (Francisque), Prelude (Handel), Riguadon (Kirchhoff),Sarabande (Handel), The King’s Hunt (Bull), Toccata (Handel).

Marcel Grandjany was a French-born American harpist and composer. At seventeen he made his debut with theConcerts Lamoureux Orchestra, and gave his first solo recital, winning immediate acclaim. He appeared with Maurice Ravel in Paris in 1913. His London debut was in 1922 and his New York debut in 1924. In the second half of the 20thcentury he was mainly involved with the founding of the American Harp Society.