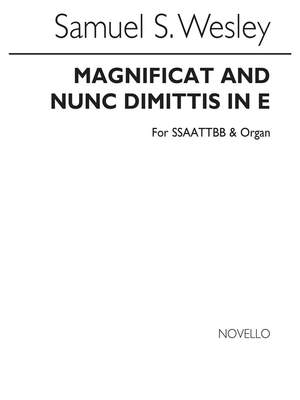 This setting of the Magnificat and Nunc Dimittis is large in scale and features compelling melodies and harmonies, moments of high drama and at the same time sensitive handling of the words. This is Wesley at his mostmasterful.Composer and Organist Samuel Sebastian Wesley is the grandson of Charles Wesley, founder of Methodism, and son of composer Samuel Wesley. He composed music almost entirely for the Anglican church and his works arefrequently performed there.By most accounts, Wesley was a difficult man who, in his determination to improve the quality of country cathedral music, often won enemies and lost support. After two unhappy appointments ascathedralOrganist, Wesley accepted a position at the Leeds Parish Church, which had a new building, a new Organ, and a vicar determined to create a choir for full Choral services. It was in these congenial circumstances thatWesley first presented this significant and influential Magnificat and Nunc Dimittis.