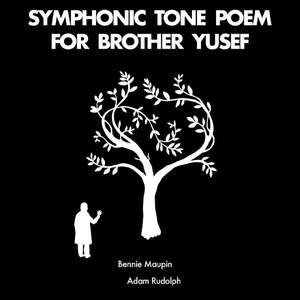 The album weaves a magical, meditative path across five movements, combining electronics, saxophone, voices and Rudolph’s wide palette of percussion from hand drums to thumb pianos and gongs. “I learned so much from Yusef about intervals,” explains Rudolph. “Greats like Yusef, Ornette Coleman and Coltrane stopped using traditional harmonic forms and introduced systems of working with intervals. So, there was an intellectual process with this album, but mostly it was just intuitive. What I love about intuition is that it erases its own tracks behind it. On the 5th Movement of this album, I was working around a major seventh but 90% of what happened was instinctive. It is a unique moment; you can’t go back and recreate it.”

Both artists bring unparalleled experience to the project. Detroit’s Bennie Maupin is best known for his work with Miles Davis on Bitches Brew, Herbie Hancock and The Headhunters and Eddie Henderson. Chicago percussionist Adam Rudolph was Yusef Lateef’s percussionist for 20 years and has worked with many other jazz luminaries including Pharoah Sanders, Wadada Leo Smith and Don Cherry. His work with Mandingo Griot Society during the ‘70s and ‘80s and, more recently, leading Hu Vibrational and Go Organic Orchestra constantly break new ground in the use and context of percussion.

“Brother Yusef was a luminous being who continues to be an inspiration to so many of us,” continues Rudolph. “He was a great teacher, not only of music, but also of how to live as an artist and as a human being.”

‘Symphonic Tone Poem For Brother Yusef’ is released on LP, CD and digital. The album is mastered by Technology Works and cover art is by Nancy Jackson, based on a Lateef saying, "Have you noticed the leaves waving to you? It's okay to wave back.”