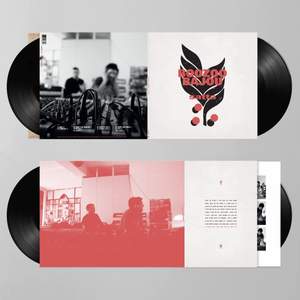 20th anniversary vinyl repressing from the original DMM-master! - First time available after the original pressing on Stereo Deluxe back in 2001. Heavyweight 180 gram black double vinyl in gatefold sleeve including sticker!

Back in 1997 the Nuremberg based Jazz musician and studio owner Peter Heider started seeing the DJ & nightlife activist Florian Seyberth for regular studio sessions. Within a few weeks they chose the name „Boozoo Bajou“ for their collaboration. With muscial ingredients like Soul, Dub, Country or Brazilian obscurities they created their own trademark sound. With the first two singles „Night over Manaus“ and „Under my Sensi“ they became a much celebrated part of worldwide downbeat scene led by artists like Kruder & Dorfmeister or Nightmares on Wax. In 2001 they created a legendary and much rated masterpiece in that genre by releaseing their debut album „Satta“ on the iconic „Stereo Deluxe“ Label. 20 years later this 60 minute blueprint original of the chill out scene named after the Jamaican word „Relax“ is available again on double vinyl pressed from the original laquers.