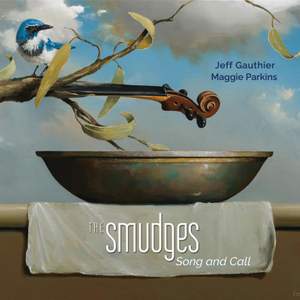 The Smudges: Song and Call

Genre defying compositions, daring improvisations and electronically manipulated sounds; The Smudges are 'cellist Maggie Parkins and violinist Jeff Gauthier. Gauthier is known for his work with Wilco-guitarist Nels Cline and his twin brother drummer Alex Cline, as well as projects with Yusef Lateef, Mark Dresser, Adam Rudolph, Todd Sickafoose and many others. Maggie has performed and recorded extensively with her sister; Bjork harpist Zeena Parkins, accordionist Guy Klucevsek, and is 'cellist with the Eclipse Quartet. Together since 2008, the Smudges blur the lines between acoustic chamber jazz and classical new music. The title track "Song and Call" is based on slowed-down bird song.