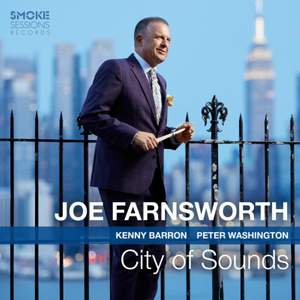 Drummer Joe Farnsworth celebrates the fortitude of New York City's jazz community with his new recording "City of Sounds" featuring a superb trio with legendary pianist Kenny Barron and bass titan Peter Washington. A group that is without question an impressive example of the classic piano trio-a format Farnsworth has thrived in throughout his storied career including collaborations with McCoy Tyner, Cedar Walton, Harold Mabern, Hank Jones, David Hazeltine and ELEW, among many others.Prior to the events of 2020, it may have been easy to take New York City's thriving and diverse music scene for granted. But, when the clubs went dark and an unsettling silence descended on the metropolis, it served as a stark reminder of just how vitally important it is to keep the music alive. Farnsworth determined to do just that and remained a stalwart jazz warrior throughout the pandemic. His celebratory new album is both a testament to his efforts and a heartfelt tribute to the musical melting pot he's called home for more than three decades. "City of Sounds" is taken from a thrilling live concert from Farnsworth's birthday week performances in February 2021, playing to an empty Smoke Jazz Club for an audience of virtual listeners streaming the music live at home. Yet, the trio plays with as much vigor, wit and muscularity as if the place was packed throughout a rollicking set that spans the stylistic spectrum. That's one of - if not the main - reasons that Farnsworth remains so dedicated to his adopted hometown, and one that he was proud to see survive the travails of a turbulent period."We're at Smoke and there's no one there, there're baffles between us, and we have masks on - Kenny Barron, who is royalty and could easily have decided just to stay home and not deal with this, is across the stage with a double mask on. But he's out there. That's the fortitude of the New York musician. You have to have it to be here because you get smacked around by so many different things, but you just keep showing up.""People ask al