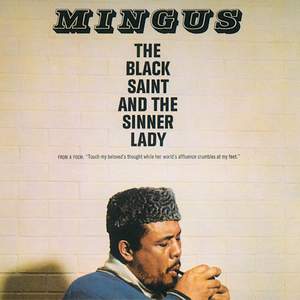 The Black Saint and the Sinner Lady

Long-considered Charles Mingus' masterpiece, 'The Black Saint And The Sinner Lady' represents high-water marks in both jazz composition and orchestration. An essential work in the history of jazz, this extended work has been performed as a ballet and features original liner notes by Mingus' psychotherapist.

Mingus's perfectionism led to extensive use of studio overdubbing techniques. The album features liner notes written by Mingus and his then-psychotherapist, Edmund Pollock. The Black Saint and the Sinner Lady is often characterized by jazz and music critics as one of Mingus's two major masterworks (the other being 'Mingus Ah Um' [1959]) and has frequently ranked highly on lists of the best albums of all time.