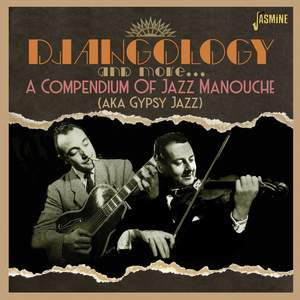 Djangology and More: A Compendium of Jazz Manouche (aka Gypsy Jazz)

Isham Jones, Gus Kahn: I'll See You in My Dreams

Gypsies - or more correctly, Romany, Romani or Roma people - have always been nomadic, and their music has been influenced by exotic Eastern, European and Arabic idioms. But GYPSY JAZZ had its roots firmly in France, where it is known as JAZZ MANOUCHE, and its origins can be traced directly to guitarist Django Reinhardt and violinist Stéphane Grappelli, who teamed up at the Hôtel Claridge in Paris, during the summer of 1934, to form Le Quintette Du Hot Club De France. Other important Jazz Manouche/Gypsy Jazz musicians included violinist Michel Warlop, accordionists Gus Viseur and Tony Muréna, guitarists Joseph Reinhardt, Baro, Matelot, Sarane Ferret (the latter trio, of Les Freres Ferret), and Oscar Alemán, all of whom are also featured heavily herein. The fifty-four sides compiled on this 2-CD set were all recorded between 1934-47, which was very much the "Golden Age" for the genre.