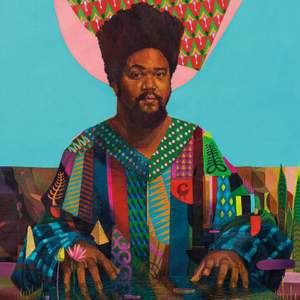 Though highly rhythmic, the pianist’s dappled, sometimes startling sound has glimpses of Art Tatum’s stride jazz and even the impressionism of Erik Satie...Brazilian music is legendarily diverse,... — BBC Music Magazine, July 2021, 5 out of 5 stars More…

The Brazilian pianist explores his cultural heritage with the exciting and creative Sankofa, conceptualised around African philosophy and Afro-Brazilian history.

From the slums of Recife in Brazil’s North-East to international jazz icon, Amaro Freitas has worked tirelessly to become the artist he is today. Gaining international attention for “an approach to the keyboard so unique that it’s startling” (Downbeat), his debut and sophomore albums Sangue Negro (2016) and Rasif (2018) arrived on a wave of instant acclaim. His new album Sankofa - a spiritual quest into the forgotten stories, ancient philosophies and inspirational figures of Black Brazil - is his most stunning and sincere work to date.

“I worked to try to understand my ancestors, my place, my history, as a black man. Brazil didn’t tell us the truth about Brazil. The history of black people before slavery is rich with ancient philosophies. By understanding the history and the strength of our people, one can start to understand where our desires, dreams and wishes come from.”

Sankofa is an Adinkra symbol depicting a backward-facing bird. After stumbling upon the symbol on a robe at an African fair in Harlem, New York - perhaps auspicious considering it’s the home of some of the great jazz pianists like Monk and Tatum, it sparked a curiosity in Amaro. He soon came to understand what it represents, and it became the foundational concept for his new album:

“The symbol of the mystical bird, which flies with its head back, teaches us the possibility of going back to our roots, in order to realize our potential to move forward. With this album I want to bring a memory of who we are and pay homage to neighborhoods, names, characters, places, words and symbols that come from our ancestors. I want to celebrate where we come from.”

With the help of Jean Elton (bass) and Hugo Medeiros (drums), who have formed the Amaro Freitas Trio since the very beginning, Amaro employs intricate rhythmic patterns and time-signature variations as if reimagining the ancient designs of his ancestors, and every track is imbued with a message or a story Amaro is compelled to tell.

‘Baquaqua’ highlights the seldom told story of the West African Mahommah Gardo Baquaqua, who was brought to Brazil as a slave but escaped to New York in 1847 where he learned to read and write. His autobiography was published by the American abolitionist Samuel Moore and now stands as the only known document about the slave trade written by a former Brazilian slave.

The delicate ‘Vila Bela’ takes its name after an area near the Bolivian border, in Brazil’s Mato Grosso region, where the 18th century Quilombola queen Tereza de Benguela led the the black and indigenous community in resisting slavery for two decades.

‘Ayeye’, Sankofa’s most joyful moment, means celebration in Yoruba and features gorgeous, fluttering piano, shuffling hi-hats and a stuttering bass groove, at times sounding as much like a D’Angelo or Alicia Keys hit as it does Bill Evans or Thelonious Monk.

These people, places and stories, as well as the many others on the album, are Amaro’s jumping off point. “I start from these theories, from these ideas, but then emotion pours into the notes, it’s my interpretation of this knowledge turned into music.”

Like all Amaro’s albums, Sankofa has taken around two years to make, with the trio spending eight hours a day, four days a week in the studio. “We treasure the creative process. We know it takes time to reach a different place, and then it takes time to understand that place, to translate it. When we want to leave our comfort zone, the most important factors are time, dedication, discipline and wisdom. Months pass and ideas start falling into place. Time is the most important thing. We cannot make it to where we want to be without it. So, I also want to transmit this message to future generations: Let’s slow down, let’s give ourselves more time, let’s do deeper things. Let’s stop swimming in the surface, let’s dive.”

Though highly rhythmic, the pianist’s dappled, sometimes startling sound has glimpses of Art Tatum’s stride jazz and even the impressionism of Erik Satie...Brazilian music is legendarily diverse, coming out of African, European and indigenous influences. And with Amaro Freitas, it’s a melting pot that just keeps on giving.

…this is a magnificent album which teems with unforgettable ideas and earcatching sonorities, performed with complete conviction by the trio.

Freitas’ first two records, Sangue Negro and Rasif, came out to almost universal acclaim, but Amaro and his men are not content merely to surf on critical approbation. This record, equally patiently crafted, flies backwards into storm, with ineffable calm and unmistakable strength and determination.