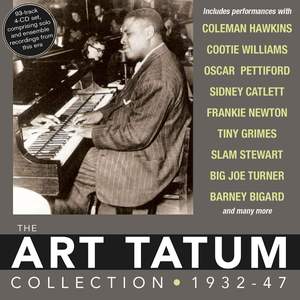 Of all the pianists in the annals of jazz, Art Tatum is the one who is most often cited by the great pianists of the post\-war era as a key influence and inspiration, his remarkable speed, dexterity, fluency and sheer relaxed mastery of the keyboard in his prolific interpretations of the standards from the Great American Songbook setting him apart from just about all of his peers. Developing his skill despite his blindness, he astounded observers, who marvelled at his technique, often saying that he sounded like two people playing. This great\-value 93\-track 4\-CD set comprises a significant proportion of his recordings from his studio debut in 1932 through to 1947 at that point he began recording for Capitol, and after that had a second substantial career phase recording for Norman Granzs labels during the 50s. It primarily features solo recordings on the Brunswick, Decca, Asch and ARA labels as well as V\-Disc recordings, plus trio and small band recordings for those labels as well as Comet, and recordings with the Barney Bigard Sextet for Black \x26 White and other bonus offerings. It does not purport to be a complete or definitive cross\-section of this first significant era of his career, but its certainly a substantial and representative showcase for one of the great piano stylists of the genre.

…if you've never studied Tatum in depth, now is the time to start.