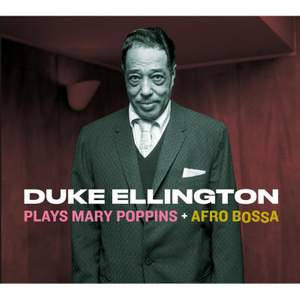 Afro Bossa and Mary Poppins, together with The Symphonic Ellington, were easily the best albums of the Duke’s brief sojourn with Frank Sinatra’s Reprise label. — Jazzwise, August 2021, 4 out of 5 stars

JAZZ UP! DUKE ELLINGTON: 'PLAYS MARY POPPINS' + 'AFRO BOSSA' + 2 BONUS TRACKS LIMITED EDITION DELUXE 6-PANEL DIGIPAK - 6-PAGE BOOKLET WITH UPDATED LINER NOTES Perhaps the most prolific composer in jazz, Duke Ellington rarely recorded music beyond his own works or those of his co-leader, Billy Strayhorn. This release presents one of the very few exceptions, Duke's arrangement of the Richard and Robert Sherman score for the film Mary Poppins. While one would expect that an album released on the crest of the bossa nova craze would consist of a compilation of Brazilian classics, Ellington's Afro-Bossa also presented here in its entirety, consists entirely of compositions by Duke and Billy Strayhorn, and is a highly personal album. Two Ellington arrangements of movie hits, "Hello Dolly!" and "Moon River", have been added as a bonus. DUKE ELLINGTON & His Orchestra featuring: Cat Anderson, Cootie Williams, Ray Nance (tp), Lawrence Brown (tb), Jimmy Hamilton (cl, ts), Russell Procope (as, cl), Johnny Hodges (as), Paul Gonsalves (ts), Harry Carney (bar, cl, b-cl), Duke Ellington (p), John Lamb (b), Sam Woodyard (d), among others.

Afro Bossa and Mary Poppins, together with The Symphonic Ellington, were easily the best albums of the Duke’s brief sojourn with Frank Sinatra’s Reprise label.