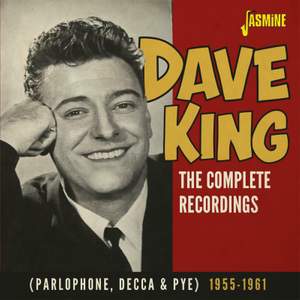 Whilst originally known as a comedian and later as an actor - most notably as the villain Parky in the Long Good Friday - Dave King was also a talented singer with a string of hits to his name in the late 50's and a hit TV Variety show.

This set includes every known recording by Dave King from his first and only release on Parlophone, the rare "Sweet Kentucky Rose" and it's flipside "You Should Know" (written by future Morecambe and Wise producer Ernest Maxim), which is reissued here for the first time, alongside all of his Decca recordings including "Memories are Made of This" and "You Can't Be True to Two" and a medley with Lita Roza and David Whitfield from a charity EP. The Decca era are featured in their original form without the additional reverb added to previous re-issues.

Also featured are the six sides he recorded for Pye and Pye international including his covers of "High Hopes" and "Many a Wonderful Moment". These too have never been re-issued.