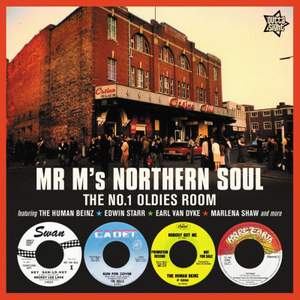 The No.1 Oldies Room.The "nighters" at Wigan Casino initially ran from 2am-8am every Saturday night/Sunday morning. From midnight onwards, crowds would gather outside and spill over onto the road blocking the local traffic. As attendances grew the crowds became a problem, particularly to the local constabulary, and on the eve of the Casino's 1st Anniversary - with a genuine threat of closure looming - a momentous decision was made. Gerry Marshall, the Casino's owner, somewhat reluctantly decided to open the club's adjoining cabaret lounge, known as "Mr M's" (named after the man himself).That night Northern Soul history was made. It was the start of an era, the birth of the "club within a club" and, as it proved to be, a temple to fans of Northern Soul "oldies". Eventually at 3am the black double doors - which separated Mr M's from the upstairs balcony of the main ballroom - burst open, and a sea of soulies hit the dancefloor for the very first time to the banging sound of "Hey Sah-Lo-Ney" by Mickey Lee Lane, spun by DJ Alan Cain and featured here in all of its remastered glory (side 1, trk 1).Such was the incredible response to that first night in Mr M's in 1974 that a petition did the rounds gaining over a thousand signatures demanding that it should continue every week! What had intended to be an emergency one-off event had unintentionally ended up being the longest, most popular "temporary" oldies venue EVER!M's, as it was more affectionately known, soon became the No.1 oldies venue in the 70s. It was unashamedly "100%" oldies and "100mph" dance tunes!!! It was like an engine room churning out vinyl memories week in, week out and the atmosphere and sounds are captured here!