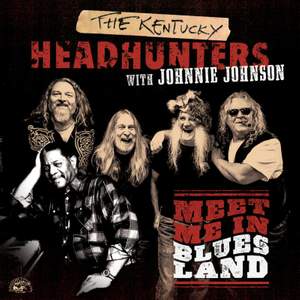 Grammy Award and Country Music Award-winning Southern rockers The Kentucky Headhunters have accounted for nearly two million scans in a career that goes back to 1989. Rock and Roll Hall of Fame inductee Johnnie Johnson was one of the greatest rock 'n' roll piano players of all time, famed for his long association and many hits with Chuck Berry. As a solo artist, Johnson released three studio albums in the 1990s. In 1993, The Kentucky Headhunters and Johnnie Johnson released That'll Work. In 2003, the band and Johnson went back to the studio and recorded Meet Me In Bluesland, which remained unreleased since Johnnie's death in 2005. Meet Me In Bluesland is a hip-shaking dose of blues, roadhouse R&B and old-school rock 'n' roll, with Johnnie Johnson working his legendary magic on the keys and The Kentucky Headhunters working the greasy grooves like they were born to play them. A jubilant set of glorious good-time music.