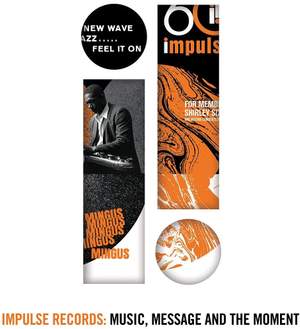 Those of us for whom Impulse has been as important a part of our cultural lives as Blue Note, perhaps even a more important one, will not be satisfied until the label reissues its entire catalogue... — Allaboutjazz.com, 24th May 2021, 4 out of 5 stars More…

Coltrane: Up 'Gainst The Wall

Mingus: Better Get Hit In Yo' Soul

Nelson, O: The Rights Of All

Pharoah Sanders, Leon Thomas: The Creator Has A Master Plan

Mary Parks: Music Is The Healing Force Of The Universe

Orange and black. Fire and ebony. Fury and pride. Wearing its signature colors proudly and raising its exclamation point high, Impulse! Records was the go-to label for music that harnessed the searching and political stand-taking of the Sixties. Launched in 1961, Impulse grew to become an inherent part of the era's velocity as well as its volume, pulling jazz into the age of Black Power, Afrocentricity, and Spiritual Expansion. In its balance of tradition and transition, it bridged the golden age of jazz, that brief window from the late Fifties to the Seventies when players representing every jazz era were alive and active-from Louis Armstrong to Albert Ayler, from the legends of lore to a new generation of energy players. Impulse treated all its musicians as innovators, revolutionaries even-from swing and bebop, to free and Afrofuturist. The performances on 'Impulse Records: Music, Message and the Moment' draw their staying power from a wide embrace of styles and sounds, as well as a tight focus on a historic moment when the promise of change was in the air and the message of racial harmony was in the music. Today that music has lost none of its relevance: the promise still deferred, the message still on time.

Those of us for whom Impulse has been as important a part of our cultural lives as Blue Note, perhaps even a more important one, will not be satisfied until the label reissues its entire catalogue on remastered CDs and audiophile vinyl. In the meantime, it would be churlish to do anything other than applaud such signs of Impulse's rejuvenation as its signing of reed player Shabaka Hutchings and welcome every tickle of its back catalogue such as this mostly well compiled, thoughtfully annotated 4xLP / 2xCD compilation marking the label's 60th Anniversary.