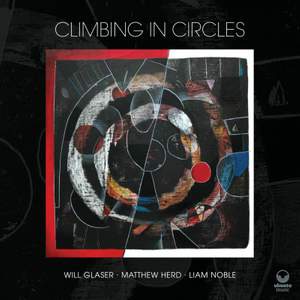 The MO is loosened here, letting the combined trio relax into musical friendship, playing covers and originals. ‘Mood Indigo’ is dismantled for inspection, in a thankfully less extreme version... — Jazzwise, March 2021, 4 out of 5 stars More…

Will Glaser is a Nottinghamshire born drummer and percussionist, mixes an eclectic range of influences in a drumming style that is musical, melodic and deeply rooted in the Jazz tradition. His inspiration draws on every corner of Jazz history, from traditional and early Jazz styles and New Orleans music to Free Jazz and improvised music, but also Rock music, experimental music, singer songwriters and pretty much anything that makes a sound. Will's playing style is a charming combination of both the familiar and surprising. Will moved to London in 2010 to study Jazz at the Guildhall School of Music and Drama. After graduating in 2014 he quickly became an in-demand sideman for a startling array of British and International Jazz musicians. The exhaustive list includes Soweto Kinch, Yazz Ahmed, Kit Downes, Nikki Iles, Dame Clio Lane, Alex Garnett, Laura Jurd, Empirical, Ian Shaw, and Jason Rebello, to mention just a few.Climbing in Circles, Will's latest, is the culmination of a three-year project, exploring his musical relationships with Matthew Herd (sax) and Liam Noble (piano). This third album sees the joining of Liam and Matt in a bass-less trio setting, the logical conclusion after Will's two previous duo releases. For this record, Will chose to depart from the same choice of repertoire as recorded previously, as the new tune choices represent the musical growth of these partnerships. Threaded together by explorative improvisations, the trio plays tunes from a range of sources.some standard repertoire, a Tom Waits song, a Paul Motion tune and a Don Cherry composition. In this very intimate setting, these musicians explore all the possibilities of this slightly unusual ensemble. Explorations in sound and colour give way to heavy grooves and walls of energy, strong melodies and transportive atmospheres which link improvisation and compositions alike.Will describes the project: "This album means an awful lot to me. Playing with Liam Noble and Matt Herd is such a trip. I guess this record sums up everything I

The MO is loosened here, letting the combined trio relax into musical friendship, playing covers and originals. ‘Mood Indigo’ is dismantled for inspection, in a thankfully less extreme version of Douglas Gordon’s Hitchcock art installation deconstruction 24 Hour Psycho, as Noble slows and delays the melody, only to find it indestructible.