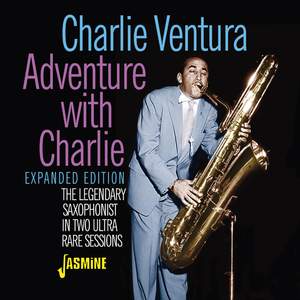 Edgar Sampson: Stompin' at the Savoy

Rodgers, R: This Can't Be Love

Harry Ruby, Rube Bloom: Give Me the Simple Life

Coward, N: Mad about the boy

Oscar Pettiford: Blues in the Closet

Ted Shapiro, Irving King: If I Had You

Dorothy Fields, Jimmy McHugh: I Can't Give You Anything but Love

Charlie Ventura, one of the most popular, fondly-remembered, and singular saxophone voices in this history of jazz, is the star of these two legendary recording sessions that have not been heard in more than five decades.

A 1953 broadcast from New York City's Band Box nightclub features Charlie in the format that made him a star: As the centrepiece of the Gene Krupa Jazz Trio-on tenor, baritone, and bass sax-along with pianist Teddy Napoleon, and that ace drummer man himself. These Boris Rose tapes only appeared on a limited edition bootleg LP some 50 years ago.

And from 1957, the year that Ventura placed second only to Stan Getz in the Playboy magazine jazz poll, "Adventure with Charlie" highlight's the saxophonist's modern jazz period, with Ventura "discovery" Billy Bean on guitar and other young lions. "Adventure with Charlie," briefly released more than 60 years ago on the King label, was likely the last, pure jazz recording ever released under the name of Charlie Ventura.